Highlights ▶The Ecological Garden ▶The specimen plantations ▶Major bamboos and Sasa bamboos species in the Specimen plantations  ▶Kyoto's Historical Heritage ▶The Tea Room “Chikufuken”
日本語
Kyoto's Historical Heritage
This bridge was previously located at the street of Teranouchi-Dori on the border between the areas named Dodo-Cho and Hokyoinhigashi-Machi in Kyoto. It was the starting point of an 11-year battle between the Hosokawa family (East) and the Yamana family (West) during the Onin War (1467-1477).
This bridge was originally built with wooden boards and was later reconstructed as a stone bridge. The original bridge was disassembled in 1963 and stored at Muromachi Elementary School before being moved to the Bamboo Park. It is one of the ruins that cannot be seen anywhere else but in Kyoto.
At the base of the bridge, there is an information board explaining the origin of the bridge. In front of the information board, you can see a bridge pier stone that was actually used at that time. 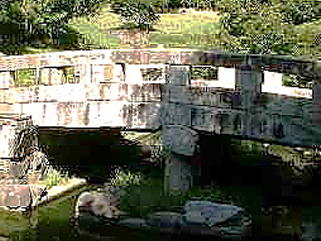 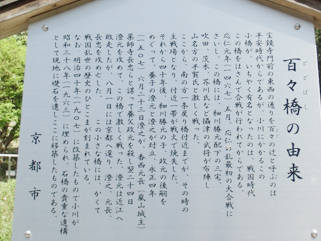 Origin of the Dodo Bridge(Dodo-Bashi)
The east-west street in front of the gate of Hokyoji Temple has been called “Dodo-no-Tsuji” since the Heian period (794-1192). This small bridge over the creek first became famous after battles were fought across the bridge during the Warring States period (approximately 1467-1568).
In May 1467, during the first major battle of the Onin War, Katsumoto Hosokawa and other warlords from Settsu, including the Miyake, Suita, Ibaraki, and Akutagawa clans, took up their position on this bridge and fought fiercely against the Hiraga clan of the Yamana side.
The area from the bridge to the Ichijo-Modori-Bashi Bridge in the south became the main battlefield at that time with the entire area subsequently destroyed by fire. Forty years later, Masamoto Hosokawa’s adopted sons Sumimoto and Sumiyuki came into conflict with each other over the succession (Masamoto Hosokawa is the son of the famous Katsumoto Hosokawa). On June 23, 1507, Sumiyuki conspired with Motonaga Kozai (lord of Arashiyama Castle), Nagatada Yakushiji and others to kill his adoptive father Masamoto, and succeeded. The following day, Sumiyuki attacked Sumimoto and fought fiercely at this bridge. Sumimoto was defeated, and then retreated to Omi(current Shiga Prefecture). On August 1, he returned to Kyoto and killed Sumiyuki, Motonaga, and Nagatada.

A piece of the history of the Warring States period is engraved on this small bridge.
The bridge was reconstructed in 1907, but the creek was buried in 1963. The foundation stone of the bridge was left at the site as a historically significant remnant of the bridge, with the remaining part moved to this park.
City of Kyoto
Stone Buddhas
In the southeast corner of the Ecological Park, there is a small open area where a number of Stone Buddhas are enshrined.
This group of Stone Buddhas are believed to have been used as the stone walls for the former Nijo-jo Castle built in 1569, which was built by Oda Nobunaga for Ashikaga Yoshiaki, the last shogun of the Muromachi Shogunate. The stone walls surrounding the castle were located at the streets of current day Karasuma-Dori, Shinmachi-Dori, Marutamachi-Dori and Shimotachiuri-Dori. These Stone Buddhas were used as part of the wall between Karasuma-Demizu(intersection of Karasuma-Dori and Demizu-Dori) and Marutamachi-Dori, which lasted about 390 meter (1,300 feet).
This fact shows the vindictive personality of Oda Nobunaga and his hatred against Buddhism. This surprises many people.
They were excavated during the construction of Kyoto's subway system, which opened in 1981. These stone Buddhas are highly valued in Japan’s history.
There is a white sandy area in the open section of the stone Buddha group, and visitors can cross the stepping stones scattered in the center of the area to see them. Beside the stepping stones, there is a board explaining the origin of these stone Buddhas.
The stone Buddha enshrined here in the middle of a quiet bamboo grove tells the story of the past. 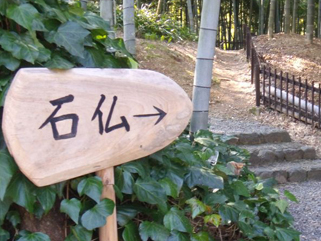 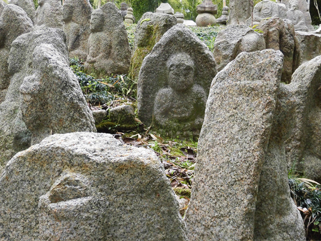 Stone artifacts related to the former Nijo-jo Castle, as described on the explanatory board.
The stone artifacts displayed here, which were mainly used for the stone walls, were excavated from the former Nijo-jo Castle. The castle was found during the preliminary excavation survey conducted between 1975 and 1978, prior to the construction of the Karasuma subway line.
The former Nijo-jo Castle was built by Oda Nobunaga in 1569 for Ashikaga Yoshiaki, the 15th shogun of the Muromachi Shogunate. It was located north of the Karasuma-Marutamachi intersection (street intersection of Karasuma-Dori and Marutamachi-Dori), and the stone walls that were discovered were made of stone Buddhas, memorial service stone monuments, Gorinto stone graves, foundation stones, and building materials as well as natural stones.
In the book "History of Japan" written by Fuis Frois, a Portuguese missionary in Japan at the time, wrote: "Nobunaga knocked down many stone statues, tied ropes around their necks and dragged them to the construction site. This action of Nobnaga gave the people who revered these stone Buddhas so much admiration and fear.” (According to "A History of Japan," translated by Kiichi Matsuoka and Momota Kawasaki. This is consistent with the above facts.
These stone artifacts are historically significant materials of the former Nijo-jo Castle which was not well known in the past, and were designated as Tangible Cultural Properties (archaeological materials) by Kyoto City on June 1, 1983.
竹林公園
▶公園内施設
▶竹の資料館
▶竹の豆知識
▶世界の珍しい竹
▶竹製品販売～Bamboo Shop～
▶通年イベント
みどころ
▶生態園と竹の研究
▶見本園
▶見本園の主な竹紹介
▶京都の歴史遺産
▶竹風軒（茶室）
子どもの広場
▶広場案内
▶広場の特徴
▶ご利用にあたって
▶団体利用・フリマ等イベント
公園のご案内
▶開園時間・料金
▶交通アクセス
▶お問い合せ
▶撮影等に関しまして
▶ボランティア募集